As Hawaii contemplates a $39 million per year biosecurity plan which will define what species can and can’t be in Hawaii, residents must ask what kind of approach should dominate our environmental management. Should it be conservation, or preservation.

There is a big difference. Conservation is human friendly, and nature is seen as a resource to be managed sustainably. For conservationists, it doesn’t matter if a species is native or introduced. What matters is the resource value of the environment. Hunters, fishermen, gatherers, loggers, and others who see nature from a practical perspective are in this camp.

Preservation, on the other hand, is human unfriendly, and nature is seen as a divine creation to be kept pristine and free from human influences. For preservationists, nature should consist of only native species living in native ecosystems that are untouched by humans. Bird watchers, hikers, and invasive species eradicators, and others who want to return to a pristine past are in this camp.

Depending on which camp you are in, your view of biosecurity is different.

For conservationists, biosecurity means keeping out pest species that can cause harm to natural resources. It also means introducing species that can be beneficial, such as new species of hardwood, or new food species of plants or animals. The general feeling is that the environment can be improved and used, and managers should protect these resources and enhance them.

For preservationists, biosecurity means preventing the introduction of new species and eliminating those that are already here but “don’t belong” in a native ecosystem, which they call “invasive” species. The general feeling is that humans have made a mess of the environment, and these human impacts must be erased by protecting native species and restoring native ecosystems.

Historically, conservation developed in response to destructive exploitation of the environment, and sought ways to manage resource use and development for sustainability. Preservation developed from the Transcendentalist movement of Emerson and Thoreau and Muir, where pristine nature was considered divine and human influences were considered corrupting of that divinity.

This conflict in values and approach is making the proposed biosecurity plan a matter of lifestyle, not just of environmental management.

People who have practiced sustainable hunting and gathering of food find their food is now “invasive” and being eradicated by the same government that once protected those species as a resource.

Game management and the associated laws protecting hunting, fishing and gathering are now in conflict with laws defining food species as “invasive” and calling for their eradication. The government agencies once charged with protecting natural resources now only protect native resources.

The contradiction is driving a wedge between the conservationists and the preservationists. Is the environment for human use, or for human exclusion?

To kill or not to kill. That is the question. The answer depends on whether or not it is “native”.

This conflict has unfortunately detracted from the importance of protecting the environment from pest species. There are species that everyone wants out of Hawaii, including disease causing insect pests, and poisonous or noxious plants and animals. Hawaii needs a way to protect itself from the random introduction of these pest species, with better inspection facilities, more inspectors, and improved procedures. And there needs to be a mechanism for responding to introduced pests quickly and effectively.

But when biosecurity extends to cleansing the environment of non-native species to return to a human-untouched past, the agenda goes from practical to absurd. 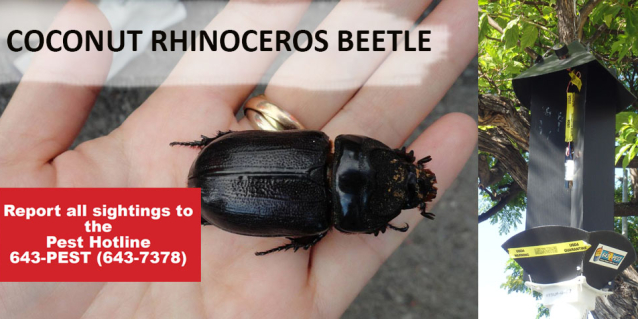 The fact is, native ecosystem restoration and preservation are a desire to return to the past. But you can’t go back. The past 300 years have seen climate change, environmental change, and cultural change that redefine modern Hawaii. We cannot go back to Hawaii’s stone age, even if we wanted to. It’s gone, part of history.

Any attempt to preserve or reconstruct past native ecosystems will require constant maintenance to keep out the reality of modern Hawaii. Species that have been here for decades to hundreds of years are now part of the environment, and eliminating them is impossible without completely destroying the environment. This means constant weed control, pest control, predator control, human control, and environmental control to recreate a world that no longer exists.

This makes sense for a small nature park, where constant management is possible. This is where endangered species can be protected and managed. But this is not a winning strategy for general environmental management.

Ironically, the maintenance needed for protecting native ecosystems makes these artificial, managed ecosystems. While preservationists strive for a nature free from human intervention, they need to constantly intervene to keep it “native”.

The preservationist’s dream of a pristine nature free of mankind can only be achieved by artificial, or human-mediated, means.

Unfortunately, many laws now mandate that environmental managers protect native ecosystems and native species at the expense of introduced species. This means that the conversation between conservationists and preservationists is not a real conversation. Government officials whose job is to protect native species and kill introduced species cannot change their minds or actions. They are doing their job, so arguments from the conservationists fall on deaf ears.

How can this conflict be resolved? The answer is for the biosecurity plan to only focus on species which are obvious pests and abandon the preservationist agenda of eradicating non-native species.

Humans must not be seen as the enemy to be eliminated from the environment along with non-native species and any signs of human influences. Humans are part of nature. We need to sustainably manage the human exploitation of natural resources, not remove nature from human use and merely worship it.

We need hunters to continue to manage wildlife sustainably, and to encourage more efficient and humane hunting. We need hunter education, not hunter elimination.

We need to teach people how to be good stewards of the world of today, instead of trying to exclude them from an artificially created nature of yesterday.

Photos courtesy of Hawaii State Government and The Nature Conservancy.